The probability of a hot war between the U.S. and China is surging every day. Both countries are adamant, confident, and feeling insecure. America is not ready to cede its global leadership and the international order it built and maintained since WW2. Meanwhile, China sees an opportunity to assert what it perceives as its rightful place in the world for the first time. For both countries to retreat from the brink of disaster, their mindset and priorities must change — U.S. and Chinese leaders must realize that it’s OK to be #2.

America must realize that the so-called American Century will eventually come to an end. With less than 5% of the world’s population and a shrinking share of the global GDP, how long can the U.S. be the world’s sheriff? The only way to sustain the current world order is for the U.S. to form alliances with Europe and Asian powers like Japan and India. However, this also requires a new playbook where the U.S. must treat those allies as equal partners and renounce the attitude of a hegemon. That is not going to be an easy transition for Washington elites.

Four years ago, I wrote in an article that China, unlike Putin’s Russia, was smart to focus on its economy and avoid geopolitical conflicts with the U.S. However, Xi Jinping has flipped the script since then. Claiming that “great changes unseen in a century are happening,” Xi is actively promoting ultra-nationalism and wolf-warrior diplomacy. China has built the world’s largest navy, ramped up its nuclear arsenal, and tested hypersonic missiles. The blockbuster movie in China this year is about the brave Chinese volunteer army defeating the imperialist Americans during the Korean War. And Chinese state media on Twitter are blithely talking about bombing Australia or nuking the USA. Not the “peaceful rise” of China that the world is hoping for.

However, China must realize that even if it becomes #1 in GDP, it doesn’t have the soft power to lead the world. The unfavorable views of China in Europe and many parts of Asia are at all time high. More revealingly, the Communist Party of China does not even have soft power over its own people. That’s why the CCP has to forbid its own people from accessing the global internet; and why there is no free speech or free media in China. In Hong Kong, China is banning movies and books; and in Xinjiang, China is sending people to re-education camps. Chinese elites lack the art of persuasion and instead resort to censorship of ideas.

There are many liberals and reformers in China who are opposed to Xi Jinping’s autocratic model. For example, Tsinghua University professor Xu Zhangrun has labeled the current regime as “Leninist-Fascist.” According to Dr. Cai Xia – a princeling and former Central Party School professor, who defected to the U.S. in 2019 – the CCP’s rule in China is neo-totalitarianism that is a combination of “terror, ideology, and a digital surveillance system.” Tough words that reveal the challenges of China model.

Of course, America’s dysfunctional political system is no paradise either. Trump’s misguided populism is not disappearing anytime soon. The country is too polarized and democracy is facing serious threats. While technically we have free media, the corporate-controlled mainstream media manipulates the narrative and keeps most people misinformed and distracted. And politicians of both parties follow the orders of their corporate masters instead of working on behalf of the voters.

Surprisingly, socialist China has many economic problems that are similar to those found in hyper-capitalist USA – inequality, unaffordable housing, unsustainable debt, asset bubbles and so on. The Top 1% in China have 31% of the nation’s household wealth. The only developed country to have bigger inequality than China is, of course, America.

The top 10% in China have staggering 70% of the wealth. These people own multiple homes in Tier 1 cities, where homes cost up to $4000 per sq ft. Meanwhile, 600 million Chinese live on less than $6 a day.

Half of all urban workers in China are “migrants” – Chinese people from rural and poorer provinces. These people did all the dangerous, dirty, and labor-intensive work in factories, construction, mines etc. and built China over the last forty years. However, they are ruthlessly exploited, underpaid, and treated as second-class citizens. Migrants and their children lack access to public services such as healthcare, education, and housing in the cities that they built. Migrants are not allowed to form independent labor unions, and they lack proper representation in the CCP as well.

In the 2014 China Leaks documents, the ICIJ revealed that Chinese elites have stashed up to $4 trillion in offshore bank accounts. Families of “communist” party officials, including those of Xi Jinping, are worth hundreds of millions of dollars. Also, more than a million relatives of “anti-Western” CCP officials have permanent residencies and citizenships in the U.S., the U.K., Australia, Canada etc.

While China has done a remarkable job of lifting 800 million people out of extreme poverty, common prosperity still remains an elusive dream. The economic system at times seems like “Predatory Capitalism with Chinese Characteristics.”

This is why many young Chinese people are silently rebelling against the system by “lying flat” (tang ping) and rejecting corporate rat race, consumption, and even marriages. This phenomenon is so widespread that China has censored the phrase online and Xi Jinping has denounced it in his speech.

If there is a war between the U.S. and China, it will start with Taiwan. For America, losing Taiwan would be infinitely worse than losing Afghanistan. Another reason for Taiwan’s strategic importance is its unrivaled dominance in semiconductor technology. As for Xi Jinping, who is 68 years old, annexing Taiwan would elevate his legacy on par with Mao. This is why the next 10-15 years will be very dangerous.

While Western interests in Taiwan reek of imperialism, China’s claims on Taiwan are also untenable. For 10,000 years, Taiwan had a thriving population of indigenous people, free from mainland China. As for foreigners, the Portuguese and the Dutch settled in Taiwan (“Formosa”) before China did.

Taiwan became an official province of China only at the end of the 19th century; and that lasted only ten years, after which Japan ruled Taiwan for the next fifty years. The Communist Party of China has never controlled Taiwan.

China has nothing to lose by maintaining the status quo vis-à-vis Taiwan. For example, thousands of world-class Taiwanese engineers have helped build China’s semiconductor industry.

The pragmatic and peaceful course of action would be to maintain the status quo and have a referendum, say, every twenty years for the Taiwanese people to decide their own future.

The two great powers, America and China, are driven by memories, recent and old — America by its desire to extend the American Century; and China by its anxiety to redress the Century of Humiliation. However, these ambitions and fears can drive both countries into dangerous conflicts that threaten the entire world.

America underestimated the rise of China; and China overestimated the decline of America. Leaders of both nations need to step back and re-calibrate their strategies. Both countries face daunting economic and societal challenges. The United States has hollowed out its industrial base, decimated its middle class, and keeps printing trillions of dollars to sustain its meager growth. And China has a long way to go before transforming into a developed nation. Given that China’s real estate boom is coming to an end and the country is aging rapidly, the economy needs a paradigm shift to continue growing. There is a real possibility that China will face prolonged stagnation like Japan experienced in the 1990s. Thus, the geopolitical rivals need to abandon the obsession to be #1, prioritize sustainable growth, focus on cooperation, and find a way to defuse the escalating tensions. 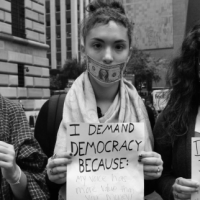